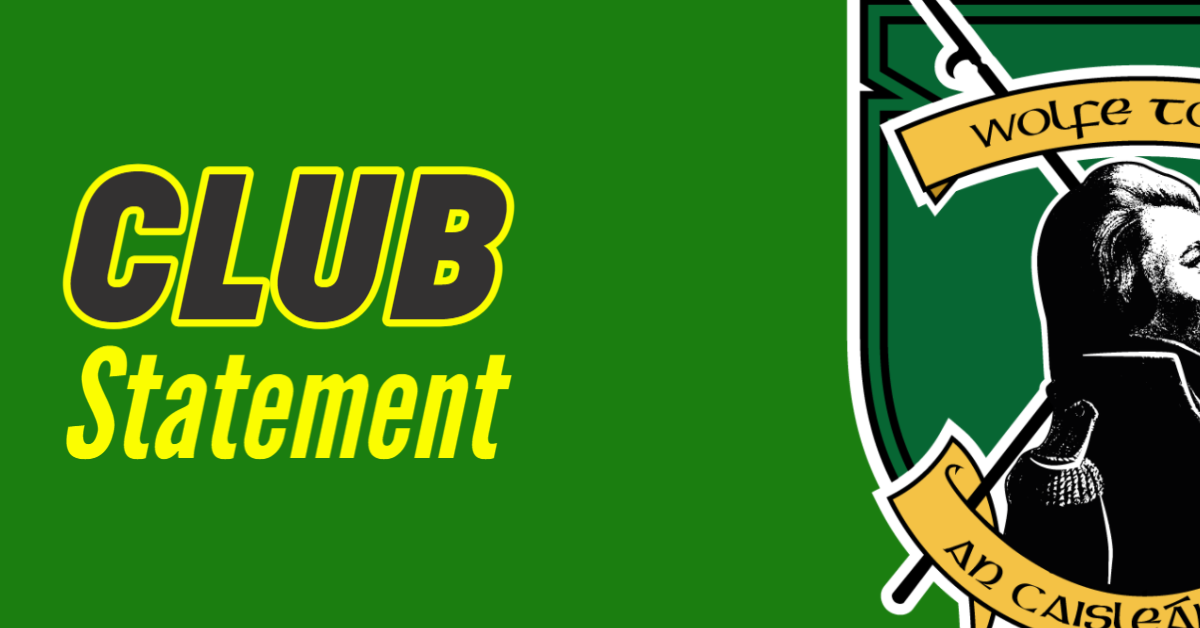 On the first anniversary since the revival of Wolfe Tones GAC it is important to reflect on the journey so far, what has been achieved in the last 12 months & what we hope to achieve in the near & far future. This time last year, a number of us sat down to begin the broad discussions aimed at exploring the possibility of establishing a functioning GAA unit in Greencastle. That was not a given. With only seven people in the room, a 50-year absence of GAA structures & no concrete way to gauge wider community interest. However, a solid plan underpinned by a strong outreach programme provided the platform to begin the process – a process that yielded great results.

Immediately the steering committee implemented a strong and robust off-field structure to underpin the new venture. It adopted the mantra of sustainability and planned for the long-term future of the GAA in Greencastle before a ball was kicked. Individuals with a wide range of skills were recruited to build the wider club and put down the foundations of the house, so to speak.

In the last 12 months much gains have been made in reestablishing a GAA structure in the Greencastle community. The significance of this should not be understated, considering we operated against the backdrop of a global pandemic. Within that 12-month period 50+ men have engaged in Gaelic football; we have developed a burgeoning juvenile section & took steps to create a structure for women to participate in Gaelic games within the club. Couple this with the fact our wider membership is stretching into the hundreds, then it is fair to state that Gaelic games have a bright future in Greencastle.

The senior mens team, our first step in development, exceeded expectations due to their hard-work & commitment to playing for the Wolfe Tones badge. A notable highlight was securing a first competitive Wolfe Tones victory in 50 years against a talented & established GAA unit. A marker to show the club was on the rise again. I would like to use this space to thank the coaching panel of Enda McAtamney, Brendan O’Hara & new additions Tony Curran & Gavin Cumiskey who worked against a difficult Covid backdrop, but ensured the team came on leaps & bounds. They have further committed to take the senior mens team into 2021, building upon solid foundations.

There will be changes in 2021 for the senior team as the club attempts to progress & bridge the gap between where we are & where we want to be. That means entering the Junior Football Championship, exploring the potential of entering the u21 championship & establishing a development team, along with maintaining our place in the South Antrim league structures.

It would be remiss not to mention the off-field structure that was patiently developed by the 2020 management committee. As the project started, we had 7 committee members to implement a strategic plan across the year. As this year finishes, we now have 30 committee members across our various club committees – including the main management committee, the fundraising subcommittee, the coaching & games subcommittee & the recently established juvenile development subcommittee. This large, solid structure will ensure the club can absorb all that comes with expansion & further developments in the future.

The wider membership of the club has been an invaluable resource in moving the project forward. Their support was crucial in our first year & will be even more so in the year ahead. To those yet to take the plunge, I call on them to join the growing Wolfe Tones family – there is a place for everybody. This is where we all belong. There is still much to do to ensure that Greencastle has a sustainable, vibrant & visible GAA unit within the area for generations to come. But the people of Greencastle have shown both the appetite & the capacity to make this happen.

I have no doubt that this time next year we will all look back, absent a global pandemic, to see a huge leap in the club’s development.