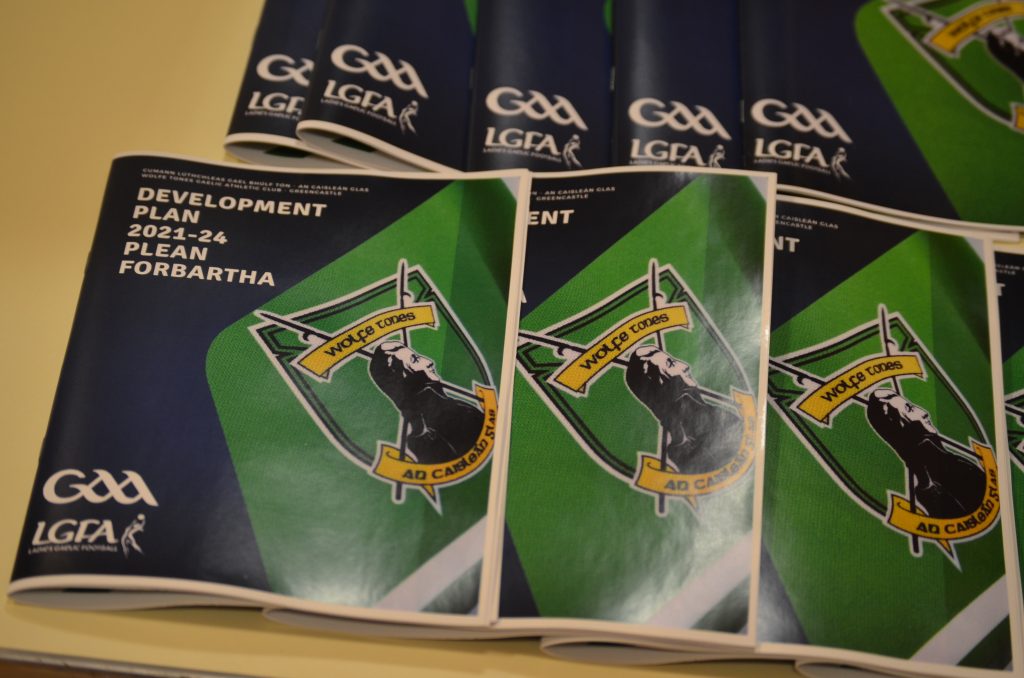 The plan, which was some 10 months in the making, was developed by a subcommittee within the club drawing on their personal and professional expertise to zero in on 6 focus areas covering everything from financial management to facilities and culture and history. As guests and club members entered the college they were treated to the beautiful music of Aoife McGinn’s harp.

Angela has a long-standing connection with the club, her late father Danny McLarnon having played for the old club during the 1950s and 1960s and now her own son Danny plays in the Senior Men’s goals.

She gave a brief history of the club’s rebirth and spoke about the importance of providing a Gaelic cultural outlet on the edge of North Belfast and in Lower Newtownabbey and how the club had been overwhelmed by the response after coming out of lockdown.

Next up, two of the club’s youngest members spoke about their experiences so far with the club. Senior Ladies’ player Katie Mulvenna spoke about the need for a Gaelic games outfit to enrich the lives of people in the area and link them together with their shared cultural heritage.

Declan Moloney spoke about how the opportunity to help coach underage and ladies teams had helped him develop as a person and how now, by sewing the seeds for the next generation, the opportunity which had been absent from the Greencastle area for the last half-century would not be repeated and that the club would endure.

Club Chairperson Stephen McCourt then introduced the CDP, going through each section in detail and setting out what the club’s commitments and aspirations were for the next three years.

Focussing on sustainability, Stephen opened with an anecdote that at the initial launch of the club in 2019, on particular naysayer stated that the endeavour was doomed to failure and that a year hence the club membership would fit inside a phonebox. Stephen then quipped to the assembled guests that Wolfe Tones now boasts over 300 members so there must be a pretty large phonebox out there.

Antrim GAA County Chairperson Ciaran McCavana was then invited to speak. Ciaran stated the importance of the GAA and the role the Association played in enriching the lives of individuals and building happy communities. He praised Wolfe Tones for the work completed thus far before highlighting the lack of GAA facilities in the Antrim and Newtownabbey Borough, stating that there were no single-use GAA facilities in the entire borough and that attitudes towards the GAA needed to change.

Closing out the speeches, Bronagh McLaughlin gave a rallying cry for the work to be done, putting the elected reps and other officials in attendance on notice that Wolfe Tones, as a vital and valuable community asset would be relying and counting on their support for the journey ahead.

To end the evening, attendees were treated to a traditional Irish dancing display by club members Aimee Adams and Ciara Donnelly.

The Executive Committee would like to put on record our thanks to the CDP Steering Group, our Croke Park facilitator Gerry McClory and everyone who contributed to the CDP Launch.