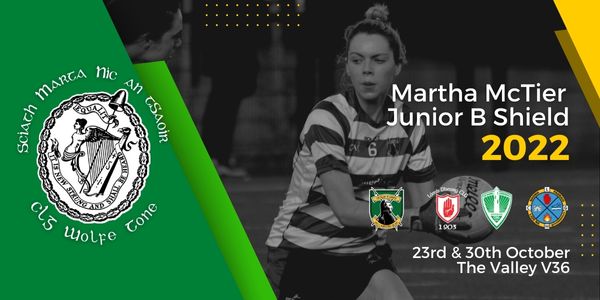 Wolfe Tones GAC will host a Junior B knock-out shield featuring the four teams eliminated at the quarter-final stage of this year’s Antrim Ladies’ Football Junior B Championship.

Wolfe Tones, Lámh Dhearg B, Naomh Comhghall and St Patrick’s Lisburn will all take to the field at the Valley V36 on Sunday 23rd October for the semi-finals with the final and a 3rd/4th play off being held the following week on Sunday 30th.

The club has also committed to holding the competition in subsequent years, regardless of how Wolfe Tones themselves fare in the Championship proper.

The Shield will be named in remembrance of Martha ”Matty” McTier (Marta Nic an tSaoir), United Irishwoman, advocate for women’s health and education and sister of William Drennan.

“This competition offers clubs, who would otherwise be wrapping up for the winter, the opportunity to play some meaningful games into the autumn. It’s a long way to go until the league starts back in the spring and it gives the clubs involved the chance to lift some silverware and end the season on a high.”

“We’re committed to offering opportunities for everyone to play Gaelic Games in an area devoid of them for so long. Ladies’ Football is on the rise in Antrim and by organising this shield competition we’re hoping to shine a light on that.

“We’ll also be running this competition going forward as a means of bringing more ladies’ football to Greencastle and we hope to inspire more young girls to get involved.”

Keep an eye on the club’s social media channels for more information about fixtures and throw-in times.