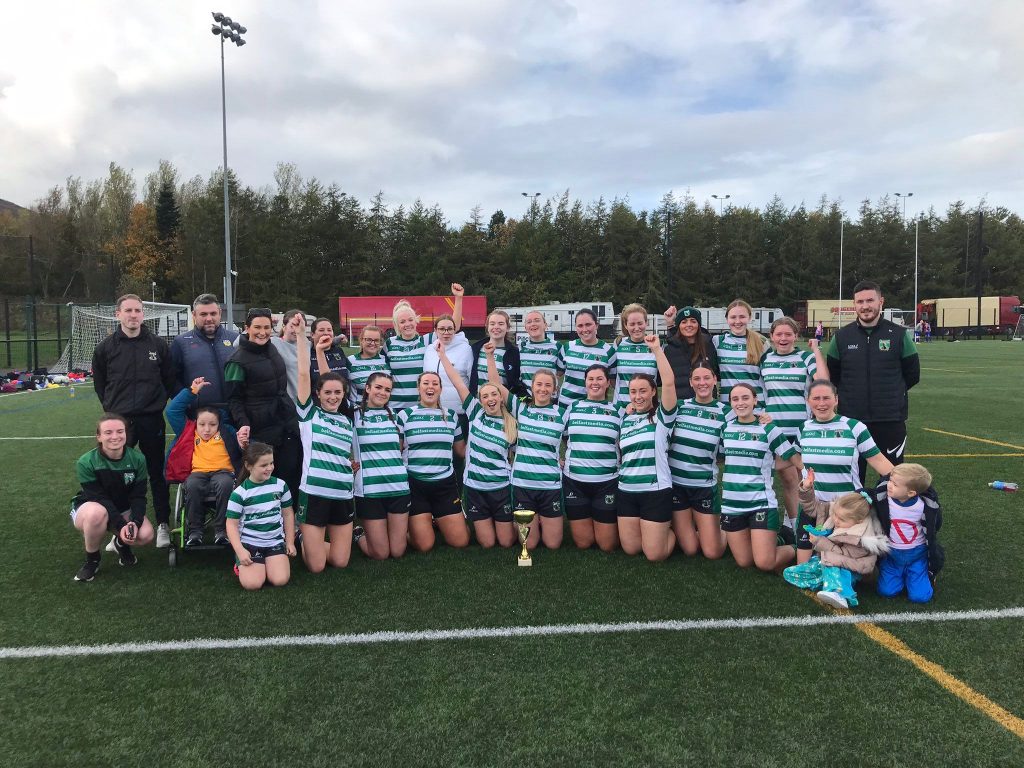 Bláithín McBride became the first ladies football captain in Wolfe Tones history to lift silverware on the club’s behalf on Sunday past as her team defeated Naomh Comhghall by a scoreline of 4-19 to 2-9 in the inaugural final of the Martha McTier Shield.

Naomh Comhghall took an early lead when a first minute penalty hit the back of the net but a quick response from Wolfe Tones through two Lauren Barry points and a Meabh McAtamney goal put the Greencastle side in the lead.

The Antrim Town side came back with tow quick-fire points to level things before Fermanagh native Colette Cassidy’s first point of the day restored Wolfe Tones’ lead and Barry raised the green flag to stretch the gulf to four points.

After a good period of pressure from Naomh Comhghall which unfortunately yielded no return, Wolfe Tones’ Grace McEvoy further added to their woes with a fine pint from the 20-metre line. Shortly thereafter, quick thinking from a McAtamney free allowed Barry to cut through the Naomh Comhghall full back line and feed Maria McPolin to raise the green flag.

Naomh Comghall added a further point and goal to their tally before a Colette Cassidy free from the edge of the D fell short allowing Lauren Moore to scramble in just in front of the square but a fine point-blank save from the Comhghall’s ‘keeper denied her and the teams went in at the break with Wolfe tones leading 3-8 to 2-5.

The second half started as the first had done with another score for Naomh Comhghall but a quick response from Cassidy restored the six-point gap. A long range free from McEvoy found Barry unmarked right in front of the goal but further heroics from the Antrim Town ‘keeper frustrated Wolfe Tones again.

Naomh Comhghall were unlucky not to add a third goal when a free hit the underside of the crossbar and rebounded out. In the ensuing scramble for the ball, the referee signalled for a second penalty however following discussions with the umpire a square ball was called.

The sides traded scores with Naomh Comhghall taking a number of excellent points from distance before McAtamney sealed the deal and put the result beyond doubt with a well worked goal.

Despite Wolfe Tones being out of sight, Naomh Comhghall never let up but a sustained period of pressure from Greencastle during a sharp rain shower yielded seven points in a five minute period and the game finished Wolfe Tone 4-19 Naomh Comhghall 2-9.