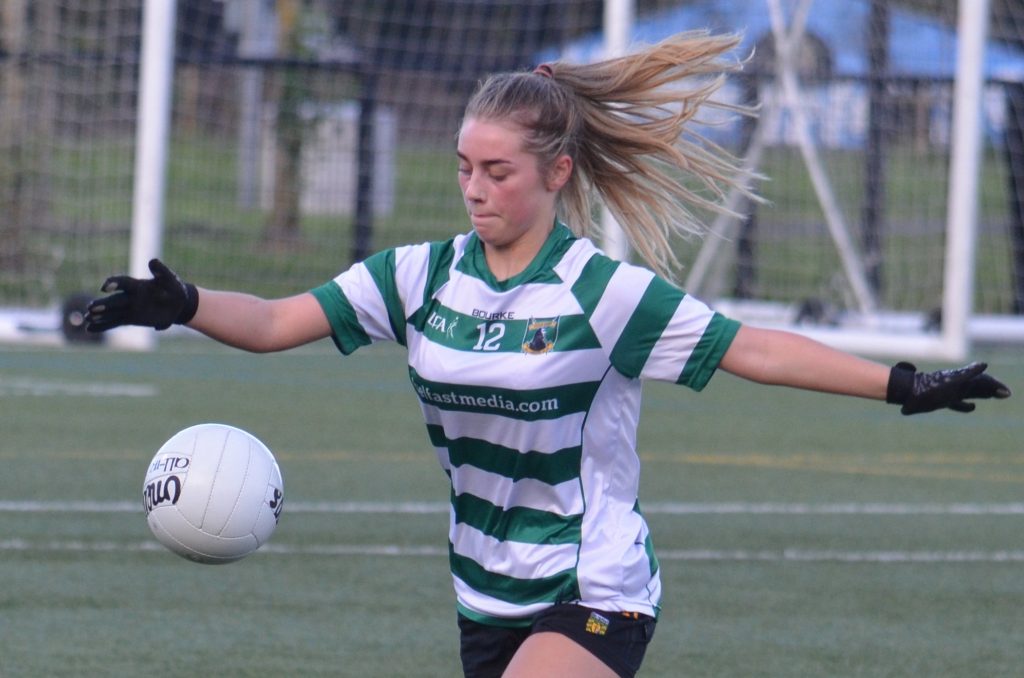 After a few challenging years since the club’s reformation, Wolfe Tones GAC completed its first competitive year without contesting with the wider societal consequences of the Covid-19 pandemic. All our current teams played their games uninterrupted and had plenty of opportunities to showcase good coaching and developing talents without the stop-start process of previous years.

2022 has been a year of immense progress. It was started against the backdrop of our Strategic Development Plan launch in late 2021, which gave the Wolfe Tones guidance in navigating the coming years. That plan defined a clear workload for the year and ensured the club was unified around a set of common goals. That unifying force created great working relationships across the board.

To give a synopsis of the year, Wolfe Tones managed to put out nine distinct teams across men’s football, ladies football and rounders – that is omitting our social teams that provided a much-needed outlet for Gaelic games in Greencastle. Within that period, a hard-working steering group began the process of introducing the small ball game to the club and in July we were in the position to launch three underage hurling/camogie sections. In 2023, they will be added to the club’s competition structure.

In men’s football, senior manager Gavin Cumiskey and assistant coaches Enda McAtamney and Kevin Kennedy led the team through a transition period where they made the step up from South Antrim football to All-County League structures. Undoubtedly a big challenge for a team that has only been together little over two years, but the level of performances matched the ambition and our senior men’s team displayed incredible progress over the season. Little was expected externally with some outlets predicting a zero-win season; however, the men got some great wins over established sides and staked their claim as a competitive Division 3 team. Based on this upward trajectory, it won’t be long before Wolfe Tones men are reaching the latter stages of Championship. The club would like to extend a massive míle buíochas to Gavin, Enda and Kevin for their leadership throughout the year. Also, a special mention to Conor Burrows who captained the team with distinction.

At the onset of 2022, the club was also in a position to create a second men’s team that competed in South Antrim Division 2. This provided an opportunity for newcomers to play games in a competitive setting under the tutelage of Paddy and Brendy O’Hara. For the year ahead, we hope to develop this team further and cement two strong, competitive men’s teams.

In women’s football, our senior ladies’ team had their first taste of competitive football as they began their first season as a Division 3 outfit. Most of the women who lined out hadn’t kicked a ball before they came together as a team but worked hard to make their impact in Antrim football structures. At close of play, after some mixed results, our first women’s team finished top of 3B – a massive achievement as newcomers. It is without question that Wolfe Tones will be eager to build on this achievement and begin to make our impact felt as an established Division Three side. The team has a layer of girls who would be lining out at Minor in a different time and space. Their upper levels are yet to be reached. The club looks forward to the continued development and progress of our senior ladies’ team under the leadership of Sean Harkin and his management team Tiarnán Millar, Declan Moloney and Neil Brannigan. Maith thú to Blaithín McBride who captained this team in its maiden year.

It would be remiss of me to fail to mention our social sections. Throughout the year Wolfe Tones organised social football, social hurling and Gaelic for Mothers and Others (G4MO) – all of which were well attended by people wishing to participate in Gaelic games free from the spectre of competition. In our G4MO section alone, we have 45 players enjoying weekly non-competitive football sessions.

At underage level, Wolfe Tones GAC saw huge progress right across the board with five separate underage teams participating in a programme of GoGames to aid their development. Significant work in St James’ P.S Whiteabbey created a great avenue for pupils to get involved in the club, along with a solid relationship with Gaelfast ensuring that numbers grew steadily over the year. Our oldest age groups will now begin the process of moving beyond GoGames and venturing into league competition in 2023. The hard work conducted by their coaches and mentors in 2022 will ensure they are well equipped to become successful on the field in the coming years. In the year ahead we will be adding a minimum of three hurling teams to this section, along with two initiatives aimed at securing the long-term sustainability of our senior teams.

By the end of 2023, Wolfe Tones GAC will have twelve underage units. The rate of development seen over the last nine months wouldn’t have been possible without the diligent work of our Juvenile Development Coordinator, Children’s Officer and all our coaches and mentors. As we exit 2022, the club has a pool of 41 underage coaches – a significant achievement by any standards.

Wolfe Tones GAC ends the competitive season with 300 club members – the majority of whom are engaged in games. 51% of that membership is female with a significant female participation at all levels of the club. I believe we have the capacity to drive this on further and ensure we finish the next competitive year with 400 members, recruiting further into our current teams and providing new blood for new ventures.

I would like to place on record a big thank you to everybody who volunteered in ensuring our games could run smoothly over the course of the 2022 season. Without the dozens and dozens of people who put their shoulder to the wheel it would be impossible to field one team, never mind the number we are currently fielding. I hope all those involved continue to recognise the significance of their work and their contribution in building a strong, vibrant and sustainable club. Their efforts and individual leadership will be needed in the time ahead as we move through the various phases of development and eventually secure a permanent Gaelic games home for our kids and grandkids.

Wolfe Tones GAC is now a mature and strategic organisation that plans in multi-year cycles, it has sustainability at the centre of all its activity and it is youth-centric. As a result of all that, it will be around for generations.

Despite the pressure felt in creating and maintaining a healthy Gaelic games club, there are hundreds from previous generations who would have loved the opportunity to be part of what we are part of now. Pressure is a privilege.